Are You Being Tricked, A Treat? Halloween In Islam.

That title is cleverer than you actually thought by the way. The pause at the comma is obligatory. The inflexion applied to the last two words in the same sentence is a must. The understanding of “Treat” to mean “very well” or “significantly” is essential. After all that is done, this entire article is encapsulated by that first sentence. But you guys already worked that out right?

So a friend of mine asked me, “What do I tell my kids about Halloween in Islam?”

To which I responded, “I haven’t got a clue!”

“But you teach classes on raising kids!”

“Yeah, but that doesn’t mean I like them or understand them or know how to turn Halloween into a halal bedtime story!”

After that shocking admission, let me also admit that I have no idea how to explain to a Halloween-obsessed world full of adults let alone kids why you would have to be absolutely stark raving bonkers as a Muslim to either celebrate it, or partake in it, or think it is something nice and simple.

As you can imagine, any scholar trying to educate Muslims about Halloween is going to come in for a hiding to nothing. People have changed. Muslims don’t have that same self-respect that they were so well-known for. As a community, we have become far more liberal than we ever should have, an understandable reaction to the increase in folks going the other way: radical extremism. But an unprecedented level of feeling inferior to others – especially the wider society that we are part of in the West – means that our new found liberalism leads to us often going to great lengths to find excuses for things, to wash away facts, paper over the cracks and ignore matters which go against the very root of the Qur’an and Sunnah that we stand for.

If you were to try and explain the Islamic ruling on Halloween, the only thing people read is: “this guy wants to say kids going Trick or Treating for sweets is haram lol” – and therein lies the problem. Are we even mature enough as a community to discuss things like this? Are you willing to question those things you considered to be so innocent and innocuous, and put yourself in awkward positions trying to explain a different perspective to your kids, or neighbours, or colleagues?

Let us rewind a little so that I can mention a few things about Halloween:

I think pretty much everyone knows these few things about Halloween, or has seen a lecture or two somewhere about the same. It leads virtually all Imams to rule that concerning Halloween, the partaking in, or celebration thereof, or the preparation for, is all impermissible and contradictory to Islamic principles. I have no problem adding my voice to that, with a few caveats which I might mention later, but I think there is something of greater value here to explore.

See, from a scholarly angle, the ruling on the celebrating of Halloween is a far more complex issue than meets the eye, and requires a very detailed and holistic study of some of the following questions:

These are reflections that might need their own research paper for each question! And this is why I always told my students that it won’t be a Faqīh who will solve this issue for us, but an Usūli, someone who can work with the principles of jurisprudence in a very comfortable and deep way to help us understand the mechanics at hand. The more you study these questions, the more you realise that modern day scholars largely skirt around the detail concerning them, because not only is there no consensus, but there is actually little agreement and scant evidence.

I often discuss this issue with my colleagues and we all admit that it requires further study and tahqīq, and it is for that reason why we will leave these for now, and just stick to an almost second-rate approach to fiqh and temporarily judge by what it looks like from the outside, in order to give the Muslims general guidance in the short-term.

So when it comes to Halloween, you’d have to be blind to not see that “outside” looking pretty crazy. People celebrating magic, the dark arts, dressing up as everything evil and celebrating the macabre and death itself etc etc.

But sometimes, it’s not even necessary to have to study a particular issue in detail such as what Halloween is, or was, or what it entails, or what it will lead to etc. Sometimes, if you have the right glasses on, you can step back and survey the field, and see a potential, more insidious danger for future (and this?) Muslims generations.

Reflect on this: how did we allow evil to become so sweet? Naughty but nice, right? Think of all the adverts: the devil either comes across as a charming, lovable rogue, or something so horrific and plastic, that it can only be a fake latex mask. Meaning: we’ve allowed evil to hide its identity very efficiently, and that cannot bode well. It’s either too nice to hate, or too crazy to be real.

“So what??” you might say. “Shall we ban Harry Potter movies now and stop kids watching Dynamo and not take opportunity of the cheap price of chocolate this week LOL??” you might argue.

Well, I don’t know. I will tell you something though: when I watch the eyes of children as they watch magic spells being cast by Harry, and then later hear them speaking amongst themselves about how they will summon the power of the xyz to do blah blah blah (fill in the gaps as you wish), it does make me wonder. When I see kids talking about Dynamo as a hero, I think to myself that if Shaytan offered these children the same power as Dynamo, would they take it, or would they feel enough fear to reject it outright without hesitation? At what point does child’s play, become a semi-belief taken into adulthood, and then left to linger as it mixes in your heart with pure iman?

If you are a believer, you should take those last few sentences above very, very seriously. Muslims believe in the Dark Side. And it is kufr to summon that Dark Side. This isn’t a joke or a movie trailer. This is Qur’anic and Prophetic fact and teaching.

So when I hear of Muslims – yes Muslims – amongst so many others, dabbling in Ouija boards and trying their hand at the dark arts, I wonder what was the role of the modern day movie culture in all that? What is the role of Halloween in that, if any? What is the role of celebrating escapism of this dunya in those things which are not Jannah-based, but Jahannam based? See, every industry will always rubbish these kind of associations with their product and teachings to protect their brand, but what about when that industry is Capitalism itself? What about when it has a $6 billion Halloween product to lose just in America?

There are many things that if you think upon them deeply, you will realise we have become desensitised to. And when one becomes desensitised, we often fall into it ourselves.

Nudity is the easiest example to think of, both at the observational level and at the level of individual practice as well. Many of us don’t bat an eyelid anymore if we see a near-naked girl walk by. Shock is old hat. Get with the times. But bring someone from the Sālihīn to visit, and they will be literally having a heart-attack on the streets. As for young girls themselves, then psychologically when everyone around you doesn’t cover, then to cover yourself becomes even more difficult. Likewise sexuality. Likewise ethics and values. Likewise evil. And likewise the Devil and all of his realm. The more innocent and natural and fun and normal it all becomes and it is sold as, the more easier it will be for us to fall into his game and no longer take him as the open enemy that Allah commands us to do.

Now you understand why I called this article “Have we been tricked, a treat?” ya‘ni, was it that easy for us as a community to have the wool so blatantly pulled over our eyes when it came to the realities of this dunya and evil and bid‘ah and kufr and its effect on our hearts and iman? But hey, you knew that already.

Reflect also on this: why have we failed to give our children and families and communities, enough reason to enjoy and celebrate good, healthy, pure, innocent reasons to celebrate and have fun? Why do we always have to go looking outside and genetically modify those acts which are anything but pure in their origin or their current reality, and use those instead? What are we saying about ourselves and our identity? Are we that weak and insecure? I don’t mean by this to pursue an isolationist policy within our community, but instead I would love for us to be proud of our own ethical and religious filter which removes those things objectionable to our theology and principles, and yet still live happy, fulfilling, beneficial and patriotic lives in our countries.

I think people give up far too easily on this. I certainly never had a problem living a fully Western and yet Islamic life, and neither should you. I never missed out on being authentically British despite never getting involved one iota in Halloween all my life, and neither will my kids, and neither should you. We sometimes exaggerate the impact of being different and are scared to make a change to the way we live our lives, or even perceive our lives. Well, you shouldn’t be so scared. And yes, sometimes that impact of being different is a significant one and might actually benefit you. In both worlds.

And so, for all those folks who just got bored silly with the last few pages of philosophy and just clicked on this article to read a few do’s and don’ts and get their fatwa, then let me save you all the research that is needed and all the evidences that should be quoted and say in the best of scholarly traditions:

Okay, maybe not that last one then. 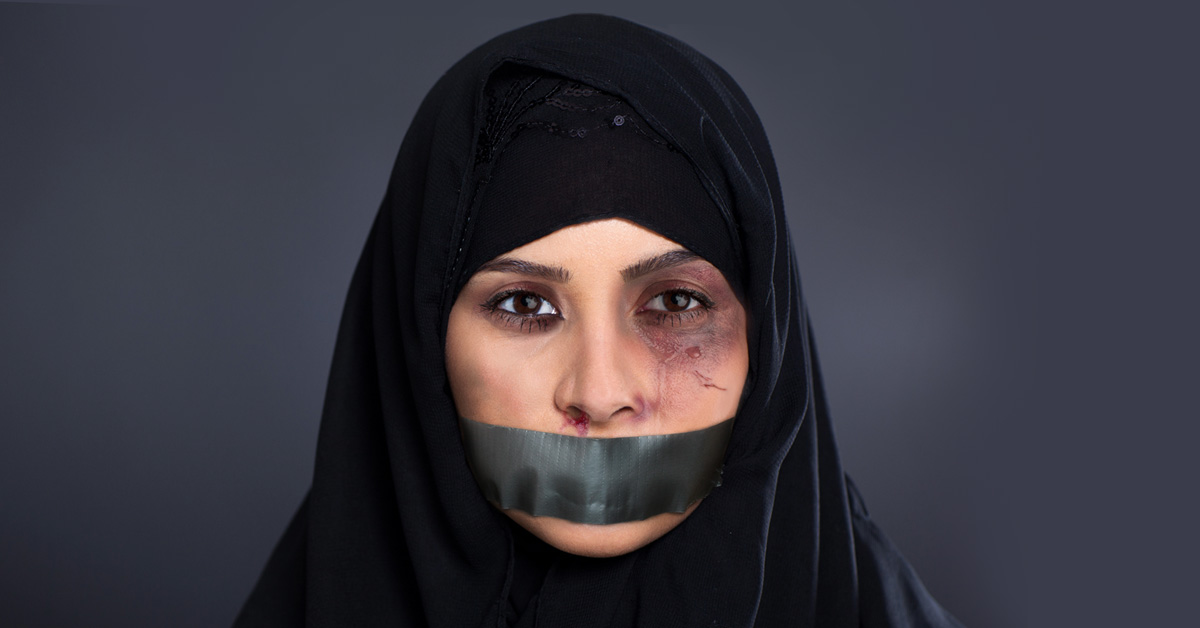 The Only Solution To Domestic Violence…Is You

The Only Solution To Domestic Violence…Is You